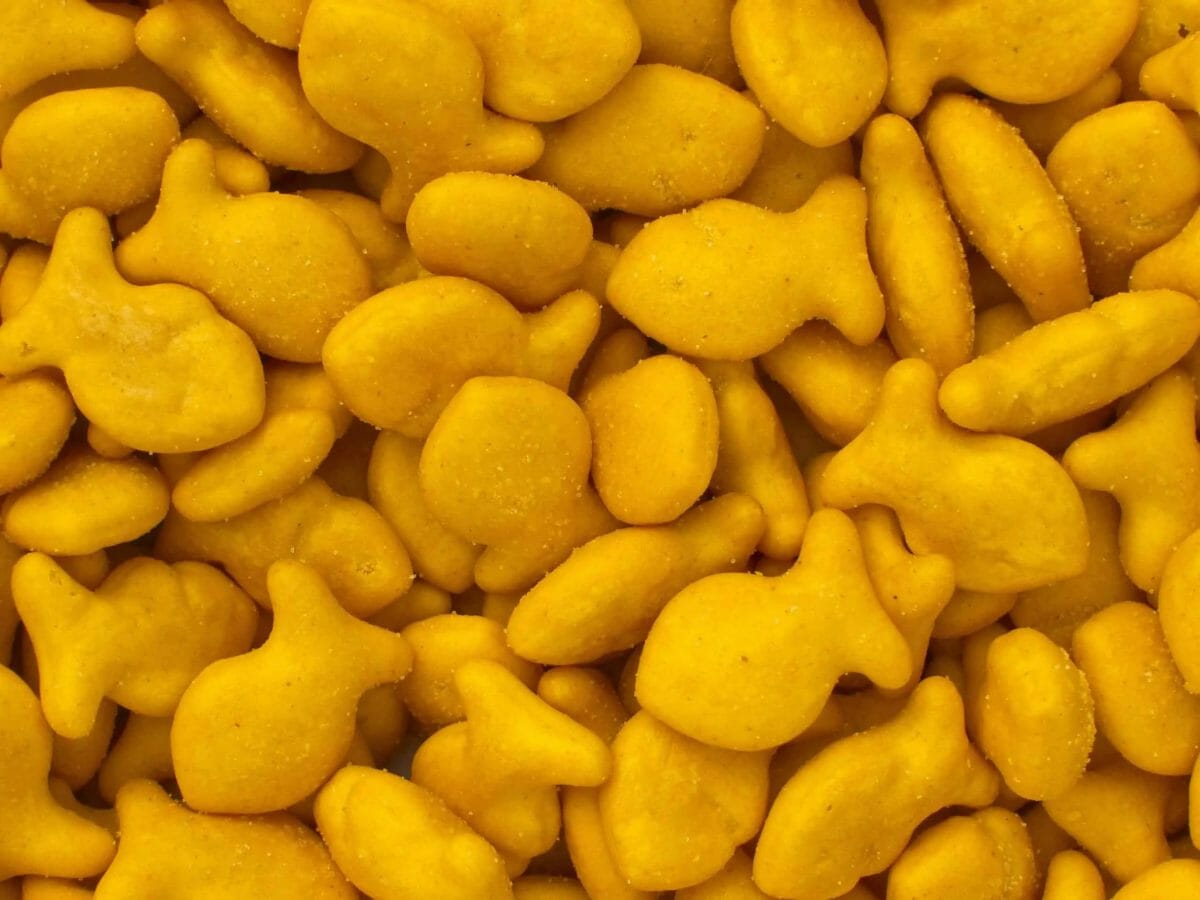 Our sweet little girl has always been an awesome sleeper. Put her down and she went to sleep. But about 6 months ago, she started to wake up screaming in the middle of the night. Not just mildly crying – screaming. We had it: we had the dreaded Toddler Night Terrors.

Contents hide
1 Toddler Night Terrors: What caused ours
2 Why isn’t there more information about Annatto?
3 What’s annatto?
4 What do you find annatto in?
4.1 Be careful of these sneaky things with Annatto
5 Why is Annatto in so many things?
6 Annatto and Night Terrors: What else do I need to know?
7 Annatto: what have you found?
7.1 Share this:
7.2 Related

Warning: we are not doctors. This is for informational purposes only and not a substitute for medical care. Please see your doctor for medical advice.

There is a ton written about Toddler Night Terrors, but we couldn’t find anything

Toddler Night Terrors: What caused ours

Well, not exactly just the fish crackers, but the main food coloring in the fishy crackers.

We first learned about the connection between Annatto and night terrors by hearing from a neighbor who had the same issue. Some days their son would simply wake up with terrible night terrors. Screaming.

It’s the worst thing for any parent.

Coincidentally, it started around the same time as our daughter, who was just over a year (and just starting to eat solids). We thought: it can’t hurt, right?

So, we cut annatto out of the diet and she’s been great every single night that she hasn’t had annatto. A couple of times, we’ve been woken up in the middle of the night to her screaming. Guess what has happened? We accidentally gave her annatto. It’s like clockwork.

The good news is that our neighbor has outgrown his annatto sensitivity – and it already appears that our little one is getting better (if she had any annatto – she’d be awake for an hour, not if she has something small, like a piece of candy, she may make some noise, but won’t awake).

Why isn’t there more information about Annatto?

Why wife and I have talked about this a lot. We think it’s pretty simple as to why you don’t hear fro it:
You out grow it fairly quickly
It would hardly ever come up in any sort of elimination diet conversation.

Even if you search “annatto food allergy” or “annatto night terrors” in Google, you won’t find anything that looks legitimate tough. You will find things like this and this.

Annatto is an orange-red dye, spice, or a food additive derived from the seeds of the lipstick tree (Bixa Orellana). It is also called achiote and can be found in Mexican and Latin American food.

It isn’t something common like gluten. It is even all-natural.

Nothing wrong with those – but we even asked our pediatrician and she’d never heard of that (and she went to Yale!).

It’s all-natural – and it’s being used as a replacement for other food dyes that are not naturally. It sounds like the right thing to do, right? Kraft has said they are getting rid of dye in Macaroni and Cheese and replacing it with… surprise, annatto.

What do you find annatto in?

We talked about fishy crackers, but you’ll also find Annatto in:

Be careful of these sneaky things with Annatto

We were also really surprised to see so much Ice Cream have annatto in it. We use Shipt (read our full Shipt Review) – and luckily, they are putting more and more nutritional information in the app, which is awesome. But in case you are having problems finding the nutritional informational (like you threw away the packaging, or are eating out, we’ve found the app Fooducate to have very accurate information. It’s actually how we found out the Annie’s Sour Bunnies has annatto in it.

Why is Annatto in so many things?

Annatto has been a traditional colorant for Gloucester cheese since the 16th century. During the summer, the high levels of carotene in the grass would have given the milk an orange tint which was carried through into the cheese. This orange hue came to be regarded as an indicator of the best cheese, spurring producers of inferior cheese to use annatto to replicate it. The custom of adding annatto then spread to other parts of the UK…as well as colored Cheddar made in Scotland… That practice has extended to many modern processed cheese products, such as American cheese and Velveeta.

So, there you have it – no good reason at all!

Annatto and Night Terrors: What else do I need to know?

Annatto: what have you found?

Have you had problems with Annatto and your little one? Let us know, we’d love to hear what you found.

That’s just about everything we know! If you have any questions, comments or concerns, please let us know in the comments below!