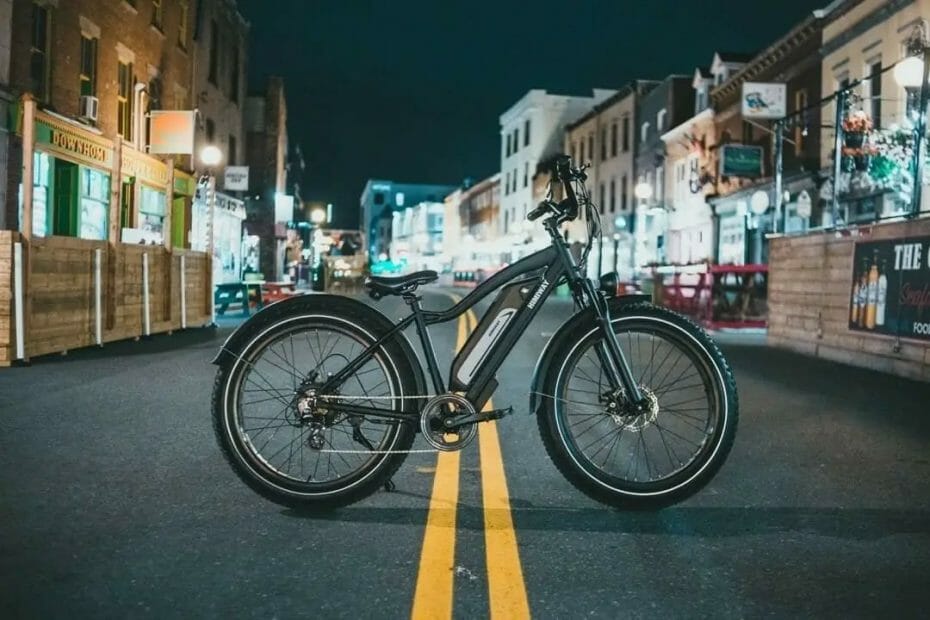 If you’ve been following We Tried It, you know we love eBikes. We loved the Himiway Escape – the moped meets electric bike we reviewed earlier this year. That’s why we’re excited to let you know that Himiway is launching 3 new eBikes this fall. Keep reading to learn what we know, what we don’t and what we expect to see in the new himiway ebikes.

Himiway will release four new ebikes, according to a recent company press release. Here’s what we know about each bike and the upcoming details:

Meet the three new bikes: what we know and what we don’t

I’m not sure why Himiway is being coy about these new bikes but it’s hard to find anything about the new himiway ebikes.

Here’s what Himiway says about their Softail Supreme Ebike:

I had to do some digging to find out what Softail even was.

Harley-Davidson’s Softail is a trademarked term for their motorcycle with hidden rear suspension, which was conceived in 1984. Over time the word “softail” has been used to describe other brands and styles as well; it often pertains to bicycles that have shock absorbers concealed inside the frame so they look like hardtails.

Himiway claims this is the most innovative electric bike they’ve released – and it will also be the most expensive. We’re not sure what makes it so innovative but we’ll be there to find out when the bike is released.

I’m a bit more confused about this eBike and what it could be. Here’s what himiway says about their new multifunctional bike:

To me, this sounds a bit more like a RadWagon-type bike or something with a built-in carrier. It will be interesting to see an eBike company, who has previously only focused on fat tire eBikes to make a foray into the world of Cargo Bikes, if that’s what they are doing.

This is actually the e-bike that I’m most curious about. Here’s what Himiway says about this eBike:

Hummmm….. what could this be?

It’s been a while since Himiway introduced the Cruiser Fat Tire eBike. And, I don’t think it’s a coincidence that Rad Power Bikes Recently Introduced the Rad Rover 6 Plus (read our full RadRover 6 Plus Preview).

Could this be the long-awaited update to the Himiway Cruiser? That’d be my bet.

Himiway promises a more exciting fall this year, thanks to the upcoming launch of 4 new cutting-edge electric bikes from the company.

August 18, 2021: Himiway is pleased to announce the upcoming launch of its 4 types of brand new e-bike models in the fall this year. The electric bike company recently released the teaser for the upcoming models; even though the teaser doesn’t reveal elaborate details about the bikes yet it has already created a lot of buzz in the outdoor adventure world. Going by the tradition with other Himiway bikes, the upcoming ones too would be under affordable range, with prices comfortably ranging between $1,000 to under $3,000.

The 3 new Himiway bikes that are slated to be launched in October 2021 are – Softail Supreme E-bike, Multifunctional E-bike, and Premium All-terrain E-bike.

“We are thrilled to share that we will soon be launching 3 types of state-of-the-art new electric bike models come fall. While one of them would be the most innovative model from our lineup ever, another one would be an advanced utility bike that would be handy for your daily affairs. The third one is exclusively designed for outdoor enthusiasts and would make a robust partner for your off-road adventures across all terrains”, stated the leading spokesperson from Himiway.

As per the reports, Softail Supreme and Multifunctional models would be new additions to the company lineup. On the other hand, the Premium All-terrain E-bike is speculated to be the successor of the Himiway’s crowd-favorite Cruiser Electric Fat bike. However, these are just speculations- the Premium All-Terrain version may be a completely new variation for all-terrain electric bikes as well.

The Softail Supreme model stands out as the “most innovative” electric bike ever built by Himiway. Engineered with cutting-edge “first-notch” suspension (especially rear and front, based on softail designation), the bike promises to deliver an all-new experience for the riders. Going by the Himiway teaser, the model would be priced somewhere around $2,099 to say, under $3,000.

The second one, Multifunctional E-bike, is being dubbed as an all-rounder that would make a valuable addition to a busy and active family. From ferrying children to making deliveries to quick grocery shopping sessions, the bike has been designed to handle all. The bike will tentatively come around $1,?99.

The Premium All-terrain E-bike is an advanced crossover between mountain and urban electric cruiser. As the name suggests, this model is especially designed for off-road adventures and has been equipped with major required features like, extended battery and incredible speed. The upcoming bike will also impress with its stylish looks. As Himiway hasn’t mentioned about fat tires with this bike, the model is likely to be a completely new model from the company. However, the other descriptions sound very similar to that of the previous Cruiser fat bike from Himiway. In regard to cost, the bike is speculated to come around $1,?99.

A pioneer of electric bikes in the American market, Himiway specializes in manufacturing advanced fat tire electric bikes at affordable ranges. The company is based in California, USA, but has recently expanded to markets globally, covering all of the USA as well as Canada, the U.K., and Germany.